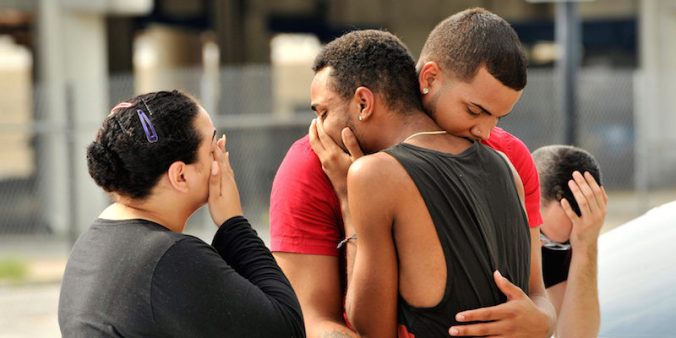 That was my first initial reaction after reading about the worst terrorist attack in America since 9/11 where more than 50 men and women died and numerous more injured at a gay bar in Miami.

The killer, now dead, was offended by seeing 2 men kiss, so in his mind, arming himself with assault weapons and opening fire on the LGBT community was his way of “getting back at them”. How pathetic and sad.

How sad that in today’s world, hate and anger are heightened to such levels and raised to such blown proportions that mass murders occur.

I was a freshman in high school living in Littleton, Colorado when Columbine happened and it was later discovered that the driving force and the main reason for the attack was hate. Those 2 boys felt anger and acted on it in the most cruel way.

Sandy Hook was another example of a deranged person who couldn’t control his anger so he took it out on a classroom full of little children.

Shootings are increasing every year and will only increase unless something is done. There has to be a solution or at least an attempt at a solution, especially when certain sexuality groups, or races, or schools are targeted.

I have a number of friends in the LGBT community and my Facebook feed has been flooded with sadness and heartbreak due to this recent shooting. It pains me to see that. Hate will never win in situations like this. This world has become a world of opinions and more and more voices are heard due to social media. My hope is that the voice of love and a helping hand start to outnumber those voices of hate and anger. We have become a divided nation in so many ways, and it is hard to watch.

Foolish people use weapons as a way of coping with their own problems and misguided ideals. I’m not going to get into the gun law discussion because I honestly don’t think I will satisfy some questions of those reading. Heroes are the ones standing up to the hate and the anger.

I believe we are all children of a loving Heavenly Father and His eye is ever on the sparrow-more importantly His eye watches over us and mourns with us.

“And it came to pass that the God of heaven looked upon the residue of the people, and he wept; and Enoch bore record of it, saying: How is it that the heavens weep, and shed forth their tears as the rain upon the mountains? And Enoch said unto the Lord: How is it that thou canst weep, seeing thou art holy, and from all eternity to all eternity?”

Enoch was so taken aback seeing the Lord weep and he couldn’t fathom that the Omniscient One could shed tears. The Lord responds with powerful and sobering words-

“The Lord said unto Enoch: Behold these thy brethren; they are the workmanship of mine own hands, and I gave unto them their knowledge, in the day I created them; and in the Garden of Eden, gave I unto man his agency;
And unto thy brethren have I said, and also given commandment, that they should love one another, and that they should choose me, their Father; but behold, they are without affection, and they hate their own blood;”

The God of the Universe wept because he saw the hate in the hearts of some of His children. The Savior taught to have compassion and charity-not malice or ill feelings towards one another.

It is my hope that the hate stops and it is up to us to lead that charge.